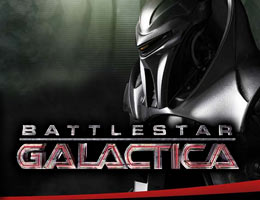 Battlestar Galactica Online is a browser based 3D space action shooter, played with thousands of other online players.

Join either the Humans or the Cylons in this epic online game where you will interact with Battlestar Galactica characters, complete missions, and fight your way through various universes.

Getting started with Battlestar Galactica Online

Although the game itself is browser based which doesn't require it to be downloaded and installed, you will require the small and easy-to-install Unity Web Player plug-in which enables 3D content. Once that is installed and the quick online registration is complete pick a side, Human or Cylone, and you are ready to get started.

Battlestar Galactica Online is similar in concept to it's predecesor Dark Orbit, but it really takes the browser based space shooter to a new level with it's use of 3D technology. As of writing the game is in Beta phase, but it's already attracted over 2 million users in the short time since its launch .

As with Dark Orbit you start off with a small space ship (Colonial Viper or Cylon Raider), but as you progress you are able to upgrade your equipment and eventually buy bigger and more powerful ships. To upgrade you can either trade resources which you have collected, or by using the Battlestar Galactica in game currency which is called Cubits. Unfortunately the best equipment and most powerful spaceships cost a lot of Cubits which aren't easy to come by without actually buying them using online micro-payments (ie. real money).

When the Cylons discovered that the humans destroyed the Resurrection Ship, they launched a colossal counter strike against the Colonial Fleet. The unsuspecting Colonials were forced to jump away to safety, but they suffered a mechanical malfunction in the process. A massive pulse of energy overloaded the FTL drives on both fleets, which triggered an uncontrolled jump that threw them off target.

In Battlestar Galactica Online, the Cylons and Colonials are stranded at the edge of one of the galactic arms. Both Colonial fleets are heavily damaged and low on critical resources. The race begins for the Colonials to repair and rearm their ships, escape and continue their quest for Earth before the Cylons gain enough strength to obliterate them once and for all.